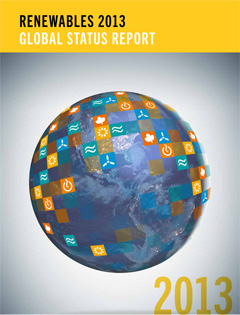 In this series of webinar-based trainings, we presented the report findings with a regional focus.

Christine Lins was appointed as Executive Secretary of REN21, the Renewable Energy Policy Network of the 21st Century, in July 2011. During the last 10 years, she served as Secretary General of the European Renewable Energy Council, the united voice of Europe’s renewable energy industry. Lins has more than 17 years of working experience in the field of renewable energy sources. Previously, she worked in a regional energy agency in Austria promoting energy efficiency and renewable energy sources. Lins holds a master’s degree in international economics and applied languages.

V.Subramanian joined the Indian Administrative Service, the premier service of the Government of India in 1971. Until his retirement in June 2008 as the Secretary to the Government in the Ministry of New and Renewable Energy, he occupied various important positions in the Government of West Bengal and the Government of India. His rich experience at both the implementation level and policy making level cuts across various sectors like Finance, Aviation, Energy, Labor etc. He was the Adviser to the Government of Mozambique for three years in 1990-1993, and he served as the Secretary to the State Government in the Departments of Power and Labor. As Secretary in the Ministry of New and Renewable Energy, he undertook path-breaking initiatives that resulted in more than doubling the grid connected renewable power generation capacity in less than three years. He pioneered the Solar Mission when he was in this position. Presently, he is the Secretary General of the Indian Wind Energy Association, a position he has occupied since October 2008. He is presently based in Delhi. He is a well-known speaker on “Renewable Energy and he is the key person in the formation of the new organization for policy advocacy in the area of renewable energy throughout India known as the “Indian Renewable Energy Federation”.

At Emergent Energy, Mr. Skeen works in the areas of energy and daylight modeling for buildings, integrative building design, energy policy consulting and research, and renewable energy systems and resource analysis. For REN21, Mr. Skeen conducted research on international renewable energy policy, markets, and industry, and development of research systems for the GSR report. Mr. Skeen has also provided supplementary authoring for the REN21 GSR reports. He earned a M.Sc., Technology Policy and Management with a concentration in energy and environment at the University of Edinburgh, and he holds a B.Sc, in Electro-Mechanical Engineering from the University of Cape Town.

David Green is the Chief Executive of the Clean Energy Council. David is an Executive Director of the International Council for Sustainable Energy, having been the founding Chief Executive of the UK Business Council for Sustainable Energy, which built on his work as Director of the Combined Heat and Power Association. He holds the Award for Outstanding Contribution to Sustainable Energy made by the UK Parliamentary Renewable and Sustainable Energy Group. In his native UK, David co-founded and launched the national charity Neighborhood (nowNational) Energy Action that has worked, since 1981, with its local partners to secure warmer homes for many millions of lower income households. He is now a Vice President of National Energy Action. He was a member of the UK Government’s high-level group on energy policy for the 10 years of its existence. David has worked as advisor to the Victorian State Government as well as the US Department of Energy and various institutions of the European Union .David is a Fellow of the Energy Institute; member of the Council of the UK Parliamentary Group for Energy Studies; member of the high-level UK Ministerial Advisory Group on Zero Carbon Homes; and member of the UK Government’s Delegation to the World Summit on Sustainable Development.

Morgan Bazilian has two decades of experience in the energy sector — much of it outside of the United States. He has worked as a research scientist, policymaker and analyst in commercial, academic and government settings in the developed and developing world. His work has spanned fiscal policy, systems analysis, infrastructure investment, market regulation and governance in all areas of energy policy from upstream oil and gas to the operation of power systems. Dr. Bazilian is currently the Deputy Director of the Joint Institute for Strategic Energy Analysis (JISEA). JISEA conducts leading-edge interdisciplinary research and provides objective and credible data, tools and analysis to guide global energy investment and policy decisions. He is also a Senior Research Fellow at the Global Green Growth Institute. Previously, Bazilian was the Special Advisor to the Director-General of UNIDO on international energy policy. In this role, he was deeply engaged with the design and implementation of the United Nations Sustainable Energy for All initiative, and he managed UN-Energy. UN-Energy is the UN’s interagency mechanism on all energy issues. Bazilian holds a Ph.D. and master’s degrees related to the techno-economic aspects of energy systems, and he has been a Fulbright Fellow

Ernesto Macias currently serves as President of the Alliance of Rural Electrification in Brussels. He is a Bureau Member of REN21, the International Relationships Manager of the Spanish Renewable Foundation, and CEO of Wonder Energy, a consultancy in renewable energy. Mr. Macias is a member of IEA’s Task 21 Group, and was nominated by former Vice-President Gore as an official presenter for the Climate Project. He has presented at many global forums on the topics of energy solutions for developing countries, environmental issues, renewable energy technologies, climate change, and emissions trading.

Ranier Hinrichs-Rahlwes is the President of EREC, the European Renewable Energy Council, the umbrella organization of European renewable energy industry, trade and research associations. And, he is the President of EREC’s member Association EREF, the European Renewable Energies Federation, the voice of independent producers of energy from renewable sources. He is representing EREC as a member of REN21’s Steering Committee and in the IEA’s Renewables Industry Advisory Board. Ranier is a Board Member of the German Renewable Energy Federation (BEE). He is BEE’s spokesperson for European and international affairs, and he is the Chairman of BEE’s related working group.

Dr. Thani Al Zeyoudi is the Director of Energy and Climate Change at the UAE Ministry of Foreign Affairs, where he leads development of foreign and domestic sustainability policy. His portfolio includes the International Renewable Energy Agency (IRENA), UNFCCC, green growth strategy, post-2015 development agenda, energy aid, and Clean Energy Ministerial, among others. Prior to joining the ministry, he worked at Masdar, Abu Dhabi’s initiative advancing renewable energy technologies and solutions, and the Abu Dhabi Marine Oil Company.