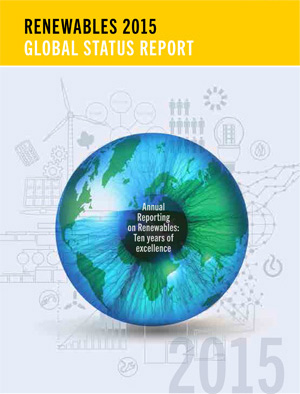 The Clean Energy Solutions Center, in partnership with the Renewable Energy Policy Network for the 21st Century (REN21) and the Partnership on Sustainable Low Carbon Transport, hosted this webinar for the launch of REN21’s flagship report, the Renewables 2015 Global Status Report, focusing on its findings related to transport.

This webinar began with an overview of REN21’s newly released Renewables 2015 Global Status Report and then looked at the transport sector. The main trends in sustainable transport were presented and the difference between industrial and developing country transport and its effect on renewable energy use were discussed.

Join us to find out what made 2014 another record year for renewables. Learn how increased additions of solar PV and wind in the electricity sector have driven other energy sectors and how 2014 marks the first time we decoupled CO2 emissions from economic growth.

Presentations were followed by a question and answer session with the audience.

About the Global Status Report: REN21’s Renewables Global Status Report (GSR), first released in 2005, provides a comprehensive and timely overview of renewable energy market, industry, investment and policy developments worldwide. The report is a true collaborative effort of authors, REN21 Secretariat staff and Steering Committee members, and regional research partners, and includes the input of over 500 individual contributors and reviewers. The GSR has become the most frequently referenced report on renewable energy business and policy, serving a wide range of audiences. 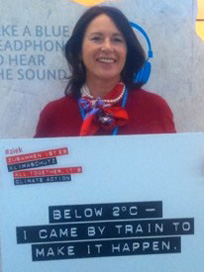 Heather Allen is an international expert on urban public transport, climate change and sustainable development. Her career spans both public and private sectors and she is an independent consultant to the PPMC (Paris Process on Mobility and Climate Change) with the Sustainable Low Carbon Transport Partnership (SLoCaT). She was involved in the team that organised the LPAA Transport Focus, Transport Day 2016 and the 80 days campaign at COP 21. Until recently she headed the sustainable transport team at TRL (one of UK’s leading centres of excellence in transport research) and worked for many years at UITP, the international association of public transport. In her recent positions Heather has been a key spokesperson and has set up several strategic partnerships with international agencies including the United Nations, national governments, cities and professional representative bodies. She has recently been elected as Chairperson of TTI, Transport Training Initiative, a German NGO to increase access to training on transport for the developing world especially Africa and she sits on a number of panels and committees (TRB’s Developing World Committee and Special Task Force on Climate Change) and is a fellow of the UK’s Chartered Institute of Logistics and Transport. Heather was a lead reviewer for REN21’s Renewables 2015 Global Status Report.