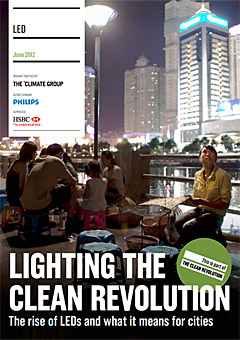 Presentation: Introduction to the webinar and panelists

Outdoor lighting is responsible for 3% of global electricity demand. Over the last few years, lighting technology has rapidly improved and consequently demand has grown for more efficient lights. LED lights have become more cost-effective and offer energy savings from 50% to 70% when compared to conventional technologies.

In this webinar-based training, we present the outcomes of case studies and other key findings from Lighting the Clean Revolution: The Rise of LEDs and What it Means for Cities, a recent report published by The Climate Group. The webinar also introduces a new tool that can be used by street lighting purchasers to evaluate cost and energy savings. The Street Lighting Evaluation Tool was developed by the Super-efficient Equipment and Appliance Deployment (SEAD) initiative. The SEAD tool is free, and includes easy-to-use calculators that can help purchasers evaluate light quality, energy use, and costs for multiple street lighting fixtures simultaneously. This webinar—hosted in partnership with the Collaborative Labeling & Appliance Standards Program (CLASP)—informs on rapidly growing technological advances that improve energy efficiency of outdoor lighting

Philip Jessup is a senior technology and market transformation executive with a record of realizing ambitious trend-setting projects to cut emission of greenhouse gases at the municipal level. In 2012, he started up LightSavers Canada, a national LED market transformation program that aims to accelerate the adoption of LED streetlighting in cities across Canada. He previously directed The Climate Group’s global technology market transformation program, working with large cities such as London, New York, Hong Kong, and Kolkata to facilitate LED streetlight projects. Jessup recently completed a consultancy with the World Bank, assisting their carbon financing of LED streetlighting projects in the Philippines. Jessup served as Executive Director of the Toronto Atmospheric Fund (TAF), the City of Toronto’s climate agency, for nine years. Prior to TAF, he developed a global network of 350 municipalities committed to reducing greenhouse gases, the Cities for Climate Protection, under the auspices of ICLEI Local Governments for Sustainability. In 1989-1990, Jessup co-authored Toronto’s first municipal CO2 reduction plan. He has served on numerous Canadian boards, most recently as a director of Manitoba Hydro, a provincial utility.

Neal Humphrey joined CLASP in July 2012. There he provides technical and policy support in coordinating CLASP’s analysis of energy-using products with the Global Research team, while also supporting CLASP’s U.S. program and implementation of the SEAD Initiative. Humphrey has a broad base of experience in energy efficiency technologies, analysis, and efficiency program design. While at the Alliance to Save Energy, he was the lead developer of the Super-Efficient Equipment and Appliance Deployment (SEAD) Street Lighting Tool, a tool for street lighting purchasers to find more efficient fixtures. He also served as the project manager for the Efficient Windows Collaborative and was on the Board of Directors for the National Fenestration Rating Council (NFRC). Humphrey began his career in energy efficiency at ICF International, where he did building energy modeling and efficiency program potential studies for a wide array of residential and commercial building technologies. He holds a dual degree from North Carolina State University, with a B.S. in Mechanical Engineering and a B.A. in Science, Technology, and Society with a focus on Sustainability.