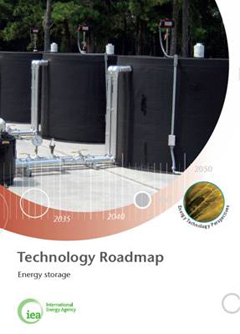 The Clean Energy Solutions Center, in partnership with the International Energy Agency (IEA), hosted this webinar to disseminate the findings from IEA’s new publication “Technology Roadmap: Energy Storage,” which looks at the role of energy storage technologies within our future energy systems.

Didier Houssin became Director of Sustainable Energy Policy and Technology at the International Energy Agency on 1 December 2012. Previously, he served for five years as Director of Energy Markets and Security. Before joining the International Energy Agency, Mr. Houssin, a French national, was Managing Director of BRGM, the French Geological Survey where, since 2004, he had extensive management responsibilities over the 850-strong group. Among other matters, he was involved at BRGM in carbon capture and sequestration and in geothermal energy. Prior to joining BRGM, Mr. Houssin was the former Director of Energy and Mineral Resources in the French Ministry of Economy between 1997 and 2004. Mr. Houssin graduated from the Ecole Nationale d’Administration and has a Masters in International Law.

Cecilia Tam is Head of the Energy Demand Technology Unit at the International Energy Agency, where she also leads the IEA’s Energy Technology Roadmaps Programme. Having joined the IEA in 2006, her work has covered technology roadmaps, finance, deployment and innovation, industry and energy efficiency. She has authored numerous IEA publications including Energy Technology Perspectives, Energy Technology Transitions for Industry, Transition to Sustainable Buildings, and a number of Technology Roadmaps. Prior to joining the IEA, Cecilia was a Senior Equity Research Analyst with Dresdner Kleinwort Benson where she covered Latin American electricity companies, working on various privatisations and equity offerings.

Melissa C. Lott has worked as an energy systems engineer and consultant for more than 10 years in the United States and Europe. Before joining the IEA, she was a Presidential Management Fellow at the U.S. Department of Energy. Ms. Lott has also worked on U.S. federal-level energy policy initiatives at the White House Council on Environmental Quality and on state-level activities in Texas and California. Ms. Lott specializes in technology, economic, and policy analysis, in particular related to power grids and energy system efficiency optimization. She is pursuing her PhD at the University College London’s Institute for Sustainable Resources.