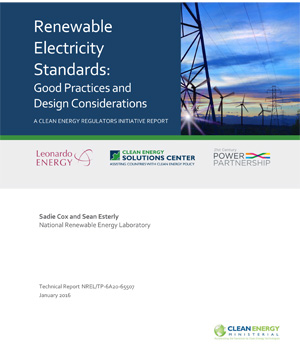 In widespread use globally, renewable electricity standards are one of the most widely adopted renewable energy policies and a critical regulatory vehicle to accelerate renewable energy deployment (REN21 2014). As of 2013, 25 national and 54 subnational governments had adopted RESs or similar renewable energy quota policies, a sevenfold increase from 2004 (REN21). Also, several countries revised their standards in 2013 to align with evolving economic and market conditions. Clear, ambitious, and achievable RESs have been critical in driving global renewable energy market growth and investment (Brown and Muller 2011). This policy brief provides an introduction to key RES design elements, lessons from country experience, and support resources to enable more detailed and country-specific RES policy design.

Renewable electricity standards are regulatory mandates that require a specified amount of electricity that is sold or generated within a given area to come from eligible renewable resources. Renewable electricity standards can be established at the national or subnational level (For example, India—see ireeed.gov.in.), and can be designed as a part of broader annual or multi-year plans, or as stand-alone mandates. In many cases, RESs are ramped up over time, allowing for steady progression to a final goal. Electricity suppliers can typically comply with an RES by:

Legislative mandates for RESs often include defined penalties for non-complying entities. This process places the burden of procuring renewable power on the electric buyers, often utilities, and it may define a process through which funds to procure renewable electricity are recovered (nrel.gov). Given these enforcement mechanisms, RESs are often more effective at driving deployment than voluntary renewable energy targets or goals (WRI, WWF 2013).

Building on government experience developing and implementing RESs, several key policy design elements and good practices have emerged. Each of these design elements, described below, should be considered as flexible and within the context of specific needs of a country or jurisdiction.

Setting specific RES requirements involves complex consideration of resource availability and technology market conditions within the context of broader economic, social, and environmental development goals. To set an appropriate RES and ensure achievability, it is important to assess:

In the absence of specific provisions, RESs will typically support the development of renewable energy technologies with the lowest project development costs. Policymakers can, therefore, identify technologies that may require targeted support to align with certain policy goals (epa.gov). Based on this assessment, “set-asides” can be used to provide specific mandates for certain technologies or resources such as solar. On the other hand, policymakers may also choose to exclude certain well-established renewable energy technologies, such as large-scale hydropower. Based on these considerations, eligibility of technologies and resources can be well defined within an RES (nrel.gov, Leon 2012).

Using the technical and economic analysis described above, policymakers can set specific RES targets appropriate for their circumstances, balancing the economic costs of increasing renewable energy use against the societal benefits, such as supporting local economic development and reducing greenhouse gas emissions. Renewable electricity standard are normally defined as a percentage of generation, a specified installed capacity or a combination of each, and they can be ramped up over time to allow the market to expand gradually yet ensure entities are meeting interim steps towards compliance. Effective RES targets send a stable policy signal, avoiding unpredictable shifts, and support long-term finance through contractual agreements rather than relying solely on shorter-term REC markets described below. However, length of program does not ensure that procurement will not occur on a short-term basis (nrel.gov).

Stakeholder engagement processes can be used to bring together government, industry and communities to discuss critical issues and opportunities that can inform goal setting. Effective processes are inclusive of diverse perspectives and include regular opportunities for provision of feedback to support policy refinement and achievement of goals over the long term (WRI, WWF 2013).

Renewable electricity standards vary in definition, often linked to either installed power plant capacity or total electricity generated (or sold). These definitions greatly impact policy outcomes. For example, an RES requiring 20% of installed power plant capacity to come from renewables can have much different outcomes than an RES requiring 20% of total electricity generation (or sales) to be met with renewables. The latter will result in greater support for renewables. This is true because solar and wind technologies depend on variable resources, and while their “rated” power plant capacity (in megawatts) may be the same as a conventional power plant, the overall power output (in kilowatt-hours) will be much lower on an annual basis. Therefore, defining the standard in relation to total renewable energy generated (or sold) will lead to greater renewable energy deployment.

Effectively designed RES also include compliance mechanisms and ensure that compliance costs are fairly allocated across electricity customers (nrel.gov). Entities can comply with the RES by purchasing electricity generation through long-term contracts or on the spot market (Philibert 2011), buying renewable energy certificates (described below), or paying a fine called an alternative compliance payment (ACP) (Brown and Muller 2011); Typically levied based on shortage of megawatt-hours in meeting the RES requirement or specific solar set aside (Hurlbut 2008). Alternative compliance payments may also differ by technology and generation start date. For instance, in Massachusetts, the broadest ACP for various renewable energy sources is 67 USD per megawatt-hour (MWh). However, to incentivize certain technologies and generation facilities, Massachusetts also designed tailored ACPs for solar PV installations, under the solar set-aside program, set at 375 USD per MWh, and for generation sources that began operation before 1998 set at 27 USD per MWh (mass.gov).

An ACP also serves as a cost control mechanism (Brown and Muller 2011), as entities can choose not to meet the RES if the cost of doing so is higher than the cost of the ACP. Proper design can minimize costs and ratepayer impacts if the availability of affordable renewable energy becomes restricted. Policymakers can set the ACP at a level sufficiently above the expected compliance costs to motivate entities to comply rather than simply pay the ACP. However, the ACP should not be set at a level that could have significant economic impacts if compliance costs become higher than anticipated. Policymakers can balance cost of compliance against the overall benefit of compliance (e.g., local economic growth) (Hurlbut 2008). ACP levels can also be varied over time in relation to decreasing technology costs (Hamrin 2014). Costs and benefits associated with ACPs will be unique to various national and subnational circumstances.

Finally, it is important to establish and provide clear, well-defined guidance on compliance to participating entities, design a robust accounting and monitoring system, and develop a plan for redistributing compliance payments, such as a renewable energy fund to support other renewable energy initiatives (WRI, WWF 2013; Wiser et al. 2010).

Renewable Energy Credit (REC): The environmental attributes associated with one megawatt-hour MWh of electricity production. RECs can be traded, bought and sold separately from commodity electricity.

Renewable electricity standards are often developed as one element of broader renewable energy policy packages that can include other critical elements such as provisions to ensure renewable energy grid access, establishment of project finance support mechanisms (e.g., power purchase agreements), and the design of complementary policies (e.g., feed-in-tariffs, tax incentives, and net metering). Renewable electricity standards can also work in conjunction with climate policies, such as carbon cap and trade systems (Bird et al. 2010). Evaluating interactions across policies is also critical and can be supported by some resources highlighted below. Developing robust renewable energy support packages can help both ensure long-term sustainable outcomes and achieve broader policy goals. For instance, in the United States, combining RESs with federal production tax credits has supported a broader enabling environment for renewable energy in several states. (nrel.gov).

Renewable electricity standards continue to be a crucial policy instrument to support scaled-up renewable energy deployment and broader development goals. Ultimately, policy development will unfold differently in each national or subnational context, but policymakers can draw from key policy design elements, international lessons, and good practices highlighted in this brief to develop policies unique to their national and subnational circumstances. 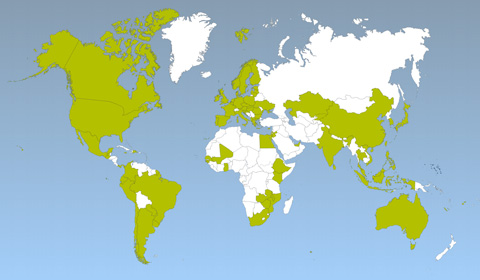 For a list of countries with RES policies in place, see the REN21 Renewables Interactive Map.