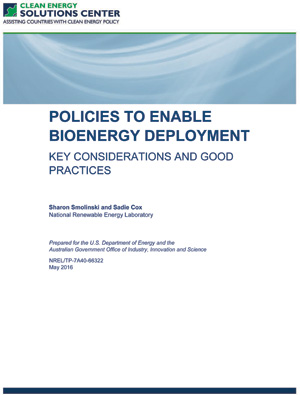 Bioenergy is renewable energy generated from biological source materials, and includes electricity, transportation fuels and heating. Source materials are varied types of biomass, including food crops such as corn and sugarcane, non-edible lignocellulosic materials such as agricultural and forestry waste and dedicated crops, and municipal and livestock wastes. Fuels produced from the conversion of these materials include biodiesel and bioethanol liquid biofuels, and biogases. Some solid fuels can be used following relatively little processing, demonstrated by the direct combustion of densified wood chips. These varied fuels can be utilized alone or in conjunction with conventional fossil fuels, as in blends of bioethanol with gasoline, and the co-firing of wood and coal. Furthermore, fuels can be applied towards multiple end uses, including from within shared facilities which can co-generate electricity and heat. In these ways, bioenergy allows for diverse end uses from a variety of biologically based sources and fuel types.

While renewable electricity generation includes contributions from solar photovoltaic, wind, and hydropower technologies, an increasing amount of generation is supplied by biopower generated from biomass (REN21 2015; Pacini et al. 2014). In 2014, global biopower capacity increased to 93 gigawatts (GW), with 433 terawatt-hours (TWh) generated (REN21 2015). In the transportation sector, most renewable fuels are liquid biofuels, although the use of biogases is increasing (REN21 2015). Global annual biofuel production increased in 2014 to 94 billion liters of bioethanol and 29.7 billion liters of biodiesel, both led by the United States and Brazil (REN21 2015). There is increased trade in liquid biofuels, involving developed and developing countries, and including activity beyond regions of production (UNCTAD 2014). While the primary market for liquid biofuels continues to be road vehicles, newer markets include aviation and other transportation sectors (REN21 2015; Souza et al. 2015a; Pacini et al. 2014). In addition, bioenergy accounts for most of the heating provided by renewable energy sources, which collectively supplied 8% of the global consumption of heat in 2014 (REN21 2015). Bioenergy, across all of its subcategories, supported an estimated 3 million jobs in 2014 (Ferroukhi et al. 2015).

While bioenergy capacity and generation have increased, several barriers to deployment exist, including:

The following summarizes the good practices and considerations for the design and implementation of bioenergy policies that are presented in this paper.